Final preparation for the Jesse Tree

Next Sunday, on December 1, Advent begins:  a good time to "plant" your Jesse Tree

Throughout Advent, evening by evening, after you light the candle(s) near your Jesse Tree, consider doing the following:

Either recite this brief prayer:
o  Parent: You, O Lord, are my lamp.
o  Children: My God, you make my darkness bright.

or try singing a verse or two from an Advent hymn (you can find very different online versions of any of the following: "Come O Come Emmanuel";  "Come, Thou Long-expected Jesus"; "On Jordan's Bank the Baptist's Cry" -- experiment till you find one you like)

·     Read the day’s brief Scripture story aloud to your children. As they get older, you may want to switch to reading the original stories from the Bible.

·     Ask one of the children to hang the appropriate "ornament" that you've created earlier in the day to go with the reading.  If you have several children, you can alternate who lights candles, who hangs the ornament, who does the closing blessing, who puts out the candle.  Try to include everyone each evening.

o  Parent: In this Advent season, Lord, help us to hear and heed these stories as we prepare for the Holy Birth on Christmas.
o  Child: God bless us all. Amen.

·     Put out the candles, unless you want to leave them burning until bedtime and ask one of the children extinguish them then.

Note: Don’t feel you have to do every reading, or that you have to follow this particular set of rituals. Find your own comfort level, using this simply as a resource to develop your own family activities.

Posted by Mary Lee Wile at 2:52 PM No comments: 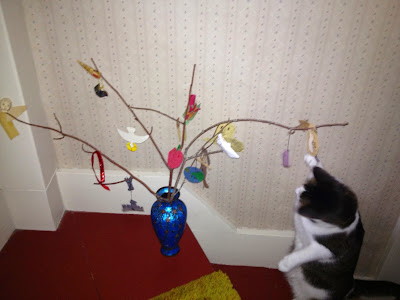 It's almost Advent, so time to start thinking about how to "keep the faith" in the midst of commercial chaos.

(Those of you who followed this blog last year will recognize much of what's coming over the next month.)

When my kids were little, maintaining a Jesse Tree during Advent helped counter the cultural pressure to see Christmas as nothing but "What do I get? What will be under the tree for me?"

By making "ornaments" to symbolize stories from Scripture and then hanging them on a small branch we cut ahead of time, we found the Jesse Tree to be a family ritual which gave the gift of Scripture to our children and allowed the old stories to etch themselves into their memories. It's a fine companion to the traditional Advent Calendar, an additional buffer to the commercial kidnapping of Christmas.

Incorporating the Jesse Tree into Advent simply involves retelling a story from Scripture each day during Advent, and then making some sort of symbol to represent that story (an "ornament") to hang on the branch. Our "ornaments" were pretty basic -- we were not an artistic bunch. Some families create much more elaborate (or at least attractive) Jesse Tree ornaments. Note the photo of our Jesse Tree -- and be convinced that even the artistically challenged can do this, or be inspired to do better.

Madeleine L'Engle used to talk about the ancient magic of telling stories around tribal fires at night. Even within our contemporary homes, we can recreate this sense of awe and wonder.  The Jesse Tree ritual of lighting a candle and telling a story unites those participating.  The more ritual and story we can incorporate into family life, the deeper the sense of community we share with one another, and by enlivening our children's imaginations with these ancient stories we can help them see themselves as part of God's ongoing creation, as part of salvation history.

If this is the first year you create a Jesse Tree, you’ll need to make the symbolic ornaments to hang on the “tree”, either day by day or in a marathon crafts session.  I’ll offer potential symbols for each story, but you might want to come up with your own; many families use a rainbow for Noah's story, for example, but one of my sons loves animals so we had giraffes.  To make the symbols, we used colored construction paper and felt tipped pens, or cut out and glued felt, or we used found materials.  For Isaac's sticks, for example, we bundled a small bunch of twigs together, and for Rahab's cord, we used a piece of red ribbon.  You can’t get it wrong.

Go for a walk with your children to look for a branch from a bush or tree that you can "plant" in a flower pot filled with sand or place in a sturdy vase. On the first night of Advent, or on whatever night you begin, instead of hanging a symbol on the Jesse Tree you will "plant" it.

Then each night, light a candle or two near where you put the Jesse Tree and tell one of the stories.  (If you are comfortable doing so, have one of the children light the candle, but keep it far enough away from the tree to avoid a fire.)

By looking at our cat Zeke trying to steal ornaments, you can get a sense of the size of the branch we use for our Jesse Tree, and some of our rather primitive symbols.  Years ago when our children were young, one of their friends looked at the dead branch with its paper ornaments and asked in horror, "Is that your Christmas tree?" Micah explained that no, this was a Jesse Tree, not a Christmas tree, and proceeded to share some of the stories that went with the symbols. Later, when he was in an 8th grade Humanities class, he aced work on Judeo-Christian Scriptures because he already knew all the stories.

Next week,  I'll have a little more about the Jesse Tree, and on December 1st and every day after, all the way through to Christmas Eve, I'll post a brief retelling of a story from Scripture along with a suggested ornament to make.
Posted by Mary Lee Wile at 10:06 AM No comments: 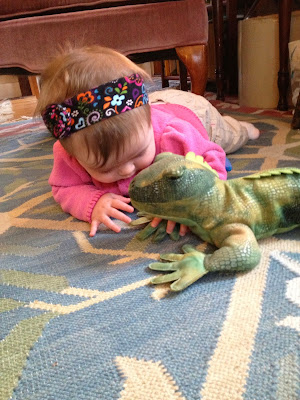 Boredom can foster creativity and spirituality.

Now bear with me while I try to connect those two seemingly disparate statements.

Reptiles don't dream because they live in a constant state of simple visual awareness that is like our REM  dreaming sleep.

Only recently did I learn that all mammals (including humans) still have a reptilian brain, which begins at the top of the spinal column and reaches into the midbrain region. Our residual reptilian brain is where our own dreams originate, and it is activated by such visual stimulants as television, movies, and video games.

This primitive part of our brain is the source of aggression, territoriality, greed, hostility, ritual -- all sorts of instinctive survival behaviors -- and it is also the place where human beings "stuff" things that disturb or distress us when we fail to process them. (This makes me think about how badly I sleep if I go to bed without processing a particularly difficult day. No wonder: I'm inviting the alligators to come out and play…..)

All this raises a couple of red flags for those of us who tend children.

First, this is another way of telling us that allowing kids to watch too much television (or movies or video games) means that we are failing to help them develop the evolutionarily more complex neocortex, but instead are providing stimulation of the primitive, aggressive reptilian part of the brain. It's not just a matter of watching violent content, but of passively watching anything for too long a time.

Next, awareness of our reptilian brain alerts us to the importance of listening to the stories our children tell, day by day, keeping us alert to those things that frighten or hurt them. Failure to confront trauma and difficulties as they arise can end up feeding those negative feelings to the reptilian brain, which in turn can lead to nightmares,  anxiety, and depression.

So where on earth does boredom factor into all this talk of aggression, repression, and reptiles?

"Boredom," I was raised to believe, was a bad word for a bad reality. My own mother was determined that her children would never be bored, and so she taught us to read early, enrolled us in ballet classes, insisted we take piano lessons, initiated play groups, and later encouraged us to have friends over often. Her encouragement of active engagement seems small potatoes compared to the crowded schedules so many kids currently maintain.

Constant busyness, however, even if it doesn't involve television or video games, can prevent the necessary processing of daily experience. If there's always "the next thing" to do, there's no time to think about what's already happened, good or bad, and there's no reason for children to be in charge of their own reality.

When we allow our kids to experience enough down time to become bored, we give them the chance to come up with ways of entertaining themselves. I used to hate hearing, "Mama, I'm bored." It felt like an accusation, a statement that I had failed as a mother. In retrospect, I realize that I was trying too hard to give them -- give them  -- whatever they needed rather than letting them find their own way.

Providing times of "nothing in particular to do," by the way, can also begin to foster spirituality in children. If we fill our children (or ourselves) with too much busyness, there's no room or time for God. Remember the promise of Scripture: God will lead us to green pastures and still waters, where we may lie down to rest and be restored (maybe even a little bored?).