Jesse Tree: the Story of the Annunciation 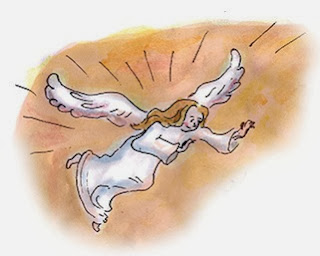 Many years after the people of Israel had returned from Babylonian captivity to their own land, Rome claimed Israel as part of its Empire. It was during this time of Roman occupation that God sent the angel Gabriel to the town of Nazareth in Galilee "to a virgin engaged to a man whose name was Joseph, of the house of David. The virgin's name was Mary." The angel told Mary that she had been chosen by God to bear a child, "and you will name him Jesus. He will be great, and will be called the Son of the Most High...the Son of God." Mary answered the angel by saying, "Here I am, the servant of the Lord; let it be with me according to your word."

Potential ornaments for Jesse Tree: an angel, a lily (symbol for Mary)
Posted by Mary Lee Wile at 5:14 PM